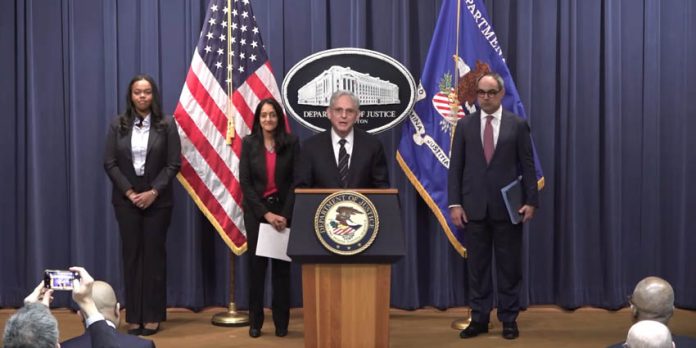 According to the lawsuit, Google earns roughly 80 percent of its earnings from advertising. If successful, the suit could significantly reduce Google’s key revenue streams.

The US District Court for the Eastern District of Virginia will hear the case.

According to the DoJ antitrust lawsuit, Google engaged in the following anticompetitive practices:

Acquiring Competitors: Google allegedly engaged in “a pattern of acquisitions” to control major digital advertising tools from website publishers. The company reportedly did so in exchange for advertising space.

Forced Adoption of Google Tools: The company also restricted users to its advertiser tools to receive access to its ad exchange and publisher server.

Auction Manipulation: Additionally, Google had reportedly manipulated auction mechanics for its products. This blocked competitors, their scaling capabilities, and their emerging tech solutions.

Numerous states involved in the case have commented on Google, accusing the firm of “anticompetitive, exclusionary, and unlawful conduct.”

US Attorney General Merrick B Garland said in a statement,

“Today’s complaint alleges that Google has used anticompetitive, exclusionary, and unlawful conduct to eliminate or severely diminish any threat to its dominance over digital advertising technologies. No matter the industry and no matter the company, the Justice Department will vigorously enforce our antitrust laws to protect consumers, safeguard competition, and ensure economic fairness and opportunity for all”

Hitting back at the litigation as quoted by Reuters, Google slammed the US government for “doubling down on a flawed argument that would slow innovation, raise advertising fees, and make it harder for thousands of small businesses and publishers to grow.”

Despite this, the DoJ accused Google of antitrust violations in October 2020 and is scheduled for trial in September. Lawsuits have taken place under both the Biden and former Trump administrations.

The news comes as the US Government cracks down on Big Tech companies such as Meta Platforms, Amazon, and Apple, among others.

Each of the state attorneys offered comment on the matter. California’s AG Rob Bonta said that the company’s advertising practices had “stifled creativity in a space where innovation is crucial.”

He said: “We are taking action by filing this lawsuit to unwind Google’s monopoly and restore competition to the digital advertising business.”

A Reuters report on Tuesday cited Google’s Project Poirot, which the DoJ claimed to “identify and respond effectively to ad exchanges that had adopted header bidding technology.”

This is Demond Cureton, Senior Journalist for XR Today, to analyse the current crisis in the Big Tech sector of the global XR industry.

The measures against Google come at one of the most turbulent economic times for the US tech industry.

Other firms such as Amazon, Meta Platforms, and Microsoft have ordered redundancies across their workforces at 18,000, 11,000, and 12,000, respectively. These measures have effectively slashed funding and staff for immersive technology departments already struggling with downsized resources.

Over 40,000 redundancies have been reported across Big Tech firms, creating massive headwinds for extended reality (XR) technologies across such companies.

The significance of the latest Google antitrust lawsuit may prevent the company from accessing adverts on future XR devices, including future consumer-focused Google Glass.

To date, the company has no major consumer products save for its Google ARCore platform, which is used heavily for public AR experiences.

The Mountain View-based firm may suffer a similar fate as Meta last year after the European Union slapped the company with a huge $414 million USD penalty. Regulators in Brussels accused the tech giant of violating General Data Protection Regulations (GDPR).

The violations included collecting data and imposing personal ads on users. Meta allegedly blocked those failing to accept the terms with restricted or blocked access to its suite of services, including Facebook, Instagram, WhatsApp, and its Quest headset lineup.

The enterprise, led by embattled Chief Executive and Founder Mark Zuckerberg, also faced issues with advert revenues after Apple changed its data collection policies. This led to the loss of $10 billion USD in revenues for the XR and social media firm last year, triggering a major row.

Meta slammed the EU ruling as having a “lack of regulatory clarity,” adding it strongly disagreed with its final decision and would appeal the charges.

It said in a statement at the time,

“[We] believe we fully comply with GDPR by relying on Contractual Necessity for behavioural ads given the nature of our services. As a result, we will appeal the substance of the decision. Given that regulators themselves disagreed with each other on this issue up until the final stage of these processes in December, it is hard to understand how we can be criticised for the approach we have taken to date, and therefore we also plan to challenge the size of the fines imposed”

Not Too Big to Fail?

Over the past week, Microsoft’s layoffs have also shuttered its XR ambitions, cutting its entire Microsoft HoloLens 2 and AltspaceVR teams.

Microsoft bought out AltSpaceVR in 2017 but has recently eliminated all team members for the virtual reality (VR) platform, which closes in March.

One should note that Microsoft is currently facing litigation after it bought out Activision Blizzard in a historic $67.8 billion USD deal.

Both the US Federal Trade Commission and European regulators have hit Microsoft with massive antitrust lawsuits. This could potentially collapse revenues for the company and is likely a major contributing factor to Microsoft’s cutbacks in metaverse and serious gaming investments.

To date, the FTC filed its complaint against the merger. It alleges Microsoft of suppressing competitors to Xbox gaming consoles and “rapidly growing subscription and cloud-gaming business.” The FTC is set to hear evidence on the claims on 2 August this year at its headquarters, its statement read.

A further Reuters report, citing people familiar with the matter, revealed that Microsoft would also likely receive antitrust warnings over the huge Activision Blizzard takeover. It added the European Commission could publish a statement of objections over the deal over the next few weeks.

As the current tech and economic climates worsen, companies have opted for leaner, streamlined revenue sources with specific products. For some enterprises, they may view the Metaverse as an experimental gamble with larger overhead costs rather than a profitable venture.

It is possible that investors could provide additional funding and research and development (R&D). Despite this, many companies, including top tech firms across the US, will have to belt tighten for now while searching for more sustainable income streams with fewer expenses for innovation. Many will have to balance between innovation and following strict regulations, leading to future regulatory disputes.

The views in this analysis piece are solely those of the author and do not reflect the XR Today brand, its partners, or affiliates.